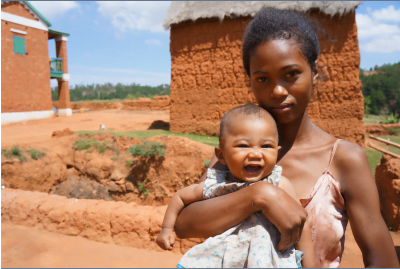 Background: More than 1.7 million children in Madagascar are stunted, with low dietary diversity being a determinant. Although diverse crops are produced in the Vakinankaratra region, it registers the highest stunting prevalence rate nationally. While children’s diets may be influenced by region-specific cultural factors, little is known about this link so far. The aim of this study was to determine the influence of cultural habits on dietary diversity in children between 6 to 59 months in the Vakinankaratra region.

Results: Subsistence farming with diverse crops and livestock was found to be a common practice. Minimum meal frequency was achieved by 78% of the sixty included children. In total, 45% attained minimum dietary diversity and 40% consumed a minimum acceptable diet. Across the three communities, the range of children attaining a minimum acceptable diet was 25–60%. Older, no longer breastfed children were prone to not achieving a minimum acceptable diet. Although caregivers had a basic idea of important foods for child development, these were often not available to or affordable for them. An effect of cultural events on diet, especially diversity, was found. Whilst for annual events this effect was short-term, the region-specific ceremony of reburying the dead (Famadihana) was found to have a long-term influence on the diet of certain families.

Conclusions: The dietary diversity of children under five in the Vakinankaratra region is influenced by cultural factors like agricultural practices, caregivers’ knowledge of child nutrition, food taboos and a region-specific cultural event. Cultural determinants, especially important traditions that result in significant expenditures, may thus influence the quality of children’s diet and should therefore be considered in future nutrition programmes and research on child malnutrition and stunting.