Learn more about the data collection of my master thesis in the video. The video shooting took place mainly in the two communities Behenjy & Ankazomiriotra. Mirindra & Sitraka actively supported me as translators & research partners. 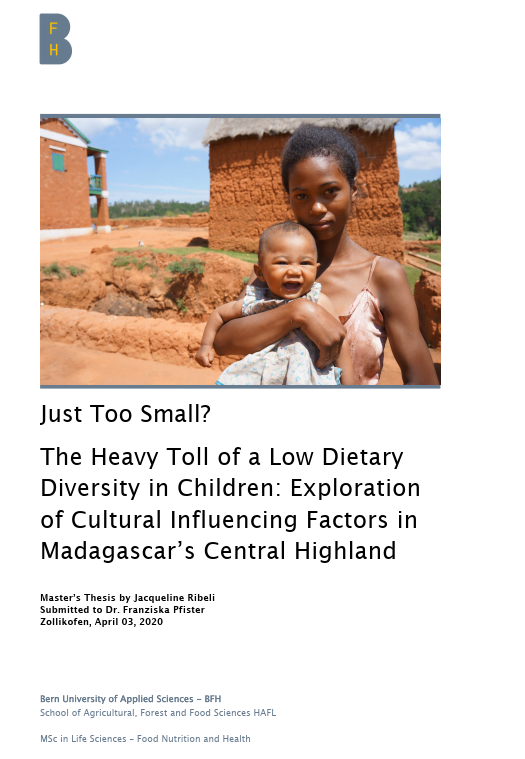 With the help of the AiNA soa team, I was able to write a research paper within the framework of my master’s degree at the Bern University of Applied Sciences (BFH/HAFL), which dealt with the following main question: What influence do cultural practices have on the dietary diversity of children aged 6-59 months in the Vakinankaratra region in the highlands of Madagascar?

The AiNA soa team helped me with the following points:

Many thanks for the successful cooperation!

Background: Every second child in Madagascar is affected by stunting. Hardly any rates of change were recorded during the last decades. A low dietary diversity was identified as a determinant of stunting. Despite the fact that diverse crops were planted in the Vakinankaratra region, the highest stunting prevalence was found there. Cultural traditions and beliefs are important in this region, though data on its influence on dietary diversity are scarce. Therefore, the aim of this thesis was to find what impact cultural practices have on the dietary diversity of children between 6 to 59 months of age in the Vakinankaratra region of the central highlands in Madagascar.

Results: Sixty conversations were carried out. Subsistence farming with diverse crops – rice above all – and livestock was a common practice. Availability of food and money were factors with a great impact on a child’s diet. Meats, dairy products, fruits, vegetables and legumes were highlighted as being healthy and important for the child’s development. In some families, the effects of annual events on the dietary diversity of the children last about one month. The negative impact on food habits due to famadihana, a ritual of reburial ceremonies of the dead, were present in more families and over an expanded time span; such as one year. The connection was due to financial expenditure, which resulted in a reduced budget for food procurement. Sixty children were included in the quantitative survey. A minimal meal frequency was achieved by 78% of children but differences were seen between the age groups; 96% in children 6 to 23 months of age and 68% in children 24 to 59 months of age. In total 45% of children received a minimum dietary diversity. Forty percent reached a minimum acceptable diet. However, considerable differences were seen between the communities; 35% in Behenjy, 25% in Ibity, and 60% in Ankazomiriotra.

Conclusions: As stunting is a multifactorial problem, the results only illuminated some cultural aspects. Most people knew which foods are positive for the child’s development, though these were often not affordable or available. The impact concerning special events was very family dependent and mostly linked to monetary issues. Famadihana was highlighted as having a negative impact on children’s diet and food availability in specific households. This aspect should not be neglected when considering the dietary diversity in children in the Vakinankaratra region.

This thesis confirmed the importance of rice. Combined with the fact that animals are of great cultural importance the role of fish farming within rice paddies seems a great chance for improving the dietary diversity in the population of the Vakinankaratra region. Further research and projects should consider barriers and promoters for such a change in agricultural activities. Dietary diversity scores were similar in children below and above two years of age. Though specifically older children, who were not breastfed anymore, were prone to not reaching a minimum meal frequency. The development of reliable indicators for children above the age of two years, is important for further research and assessments.