From a feather-like feeling to almost cracking feet

Hello everybody! Today I would like to share with you one of my greatest adventures that I experienced during my time at AiNA soa. I will remember this experience forever.

It happened in September 2017, when I was assigned with the medical team for a first aid training in Anosibe An’Ala – in the Alaotra Mangoro region, 192 km from the capital. Before we arrived in Anosibe An’Ala, we stayed overnight in the “Moramanga” district. The hotel was good and so was the food, but none of us could imagine what would await us the next day… Safety belt to 😉

At 7 a.m. we packed our things and went to the Taxibrousse station where we were on our way in a shared cab – an old Mercedes van 508 – towards our destination Anosibe An’Ala. The distance from Moramanga to Anosibe An’Ala is about 70 km, but the journey by car takes about 6 hours as planned. So you can imagine how the road conditions are… Due to the muddy and slippery road we were always faced with challenges. So we had to get out of the car and push the van. We covered about 30 km before the van broke down! The driver and his assistant tried their best to fix it, but their efforts were in vain. In the end they looked for another solution and called the Taxibrousse station to provide us with another means of transport. After a long wait, the four of us decided to climb a mountain, where we had reception to call and let the team in Tana know. When it darkened we went back to the place where the broken van with all the passengers was. Together we waited for the “new” van. It reached us at 9 pm, but to our surprise, this truck was already full of people and we wondered how we could all fit into it… One by one we climbed onto the loading area (picture below). There was hardly any space for the feet. The night was long as we were all awake during the drive and held on tight. We felt like feathers crammed together in a pillow.

Seven hours later at 4 am we finally arrived in Anosibe An’Ala. Ready but unharmed we went to the hotel, covered with mud and dust (picture below), where we could relax for a few hours. Soon after we had to cover another 41 km by motorcycle to reach the village where we had planned to train. So we were on the road for another two hours. In the evening everything went its usual course and we could recover from the strains of the previous night.

The real challenge surprized us at the next day. We left early in the morning to get to the meeting point, from where the responsible doctor accompanied us to his workplace. This was where we were to conduct the training. His CSB (basic health center) was about 50km away, in a place where even motorcycles cannot pass through. No choice, we took the way to the small village “Ambodimanga” under our feet. To avoid a lot of load, we had only taken the most important things with us: a bottle of water and a small pack of cookies. We saw beautiful landscapes, met warm hearted people and crossed many rivers.

But the way was long and we slowly got hot. I was very tired and in addition the water and cookies were slowly running out. We walked for 5 hours without interruption and our hunger continued. Actually, everything was already calculated by the doctor and no time should be lost so that the night would not catch us on the way! At noon we were supposed to be at a small restaurant on a mountain for lunch. The only place where there is food on this route. To reach the restaurant we first had to walk up a steep slope. To be honest, I thought I would never make it, my feet could hardly carry me; I asked for a short break, but even this was hardly enough to recharge my batteries.

When we finally reached the top, there was a man who sold cheap bananas, there were about 10 left. I bought them all. It was like the most wonderful and delicious food I had ever eaten. Now there were only a few meters left in front of the restaurant. When we entered and sat down we asked for the menu… The waiter told us that they had rice. I reasked and wanted to know what else was on the menu. Whereupon he said that rice is everything and thath there is nothing else to eat. But maybe he could find some fish. We said that that would be great and waited. When the meal was served, to our surprise, besides rice, there was also some dried fish cooked in boiling water with little salt and tomatoes. It did not taste good, but we ate it anyway and were grateful.

After this little break we regained our strength and returned to the path… It was the longest walk I have ever done in my life. I was so close to giving up! I can hardly imagine the people who walk this way back and forth every day, looking for food and the most necessary things for their homes. It made me sad to see children with their families crossing our path and carrying things on their heads for 50 kilometers. They are used to it and do not complain, but my heart refuses to acknowledge this fact.

On the way, I asked the doctor over and over again if we were almost there, and he always replied, “Yes, we are almost there”. He said this even in moments when we still had 3 hours of walking ahead of us. At 4 pm we reached a small store to take a break. The doctors could enjoy coffee and bread. However, I fell asleep at the same moment I sat down and only heard my friends in a dream as they asked me if I wanted coffee and bread.

Long story short: we arrived in the village at 6 pm. My feet felt as if they were going to disintegrate and break apart and my head was about to explode, but thank God we made it! I made it. We could enjoy a shower, good food and a long, restful sleep. For two days we gave first aid training in this village. After that the way back didn’t feel like the first way. I quickly got used to walking and we could keep up with the doctor and the villagers who were with us. After returning to the city, we now tend not to take the bus, but to walk.

Thank you for reading this little story that I experienced. It changed the way I see things, so I wanted to share it here with you. Looking back, I can talk and laugh about what happened but during those days I couldn’t even show my teeth. 😉 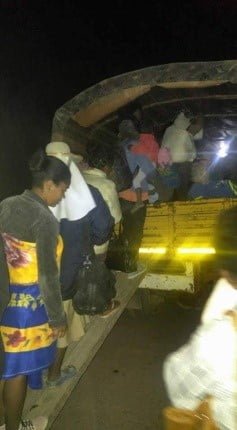